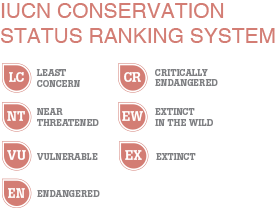 Description: This very striking pigeon was at 30 cm long the largest of the six blue pigeon species. It had a white head and shoulders, a mainly blue body and a red tail. Males had red foreheads. The red, white and blue sequence was said to resemble the Dutch flag, hence the name “pigeon Hollandais”. It had fine white feathers around the neck that resembled a ruff. These could be raised and used for display. Its diet was probably mainly fruit, nuts, molluscs and other invertebrates. The Mauritius blue pigeon is believed to have became extinct in about 1830 due to the continued predation from introduced mammals and the increased rate of deforestation during this period.